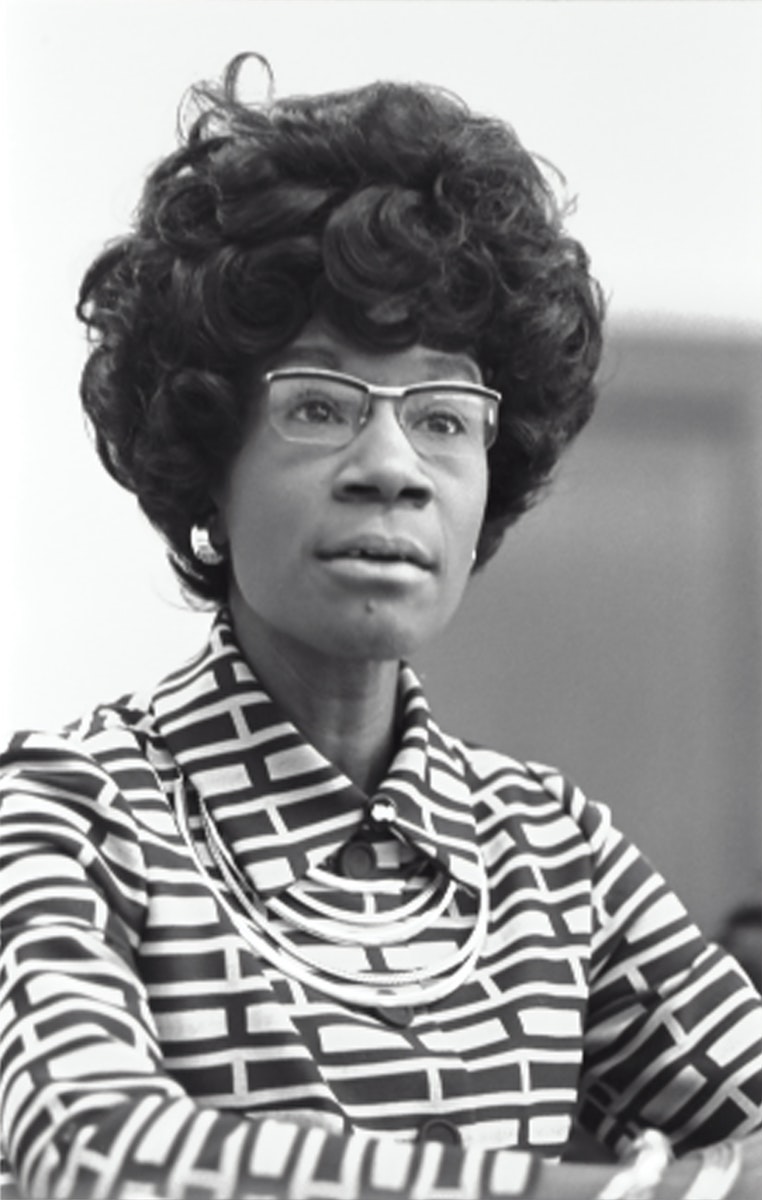 Shirley Chisholm personifies the triumph of the marginalized becoming center stage in the American political story.

The first African American woman elected to Congress, she served a newly reapportioned Congressional district centered in Brooklyn, New York, for seven terms, starting in 1969. The daughter of immigrants from Guyana and Barbados, Chisholm was a tireless advocate for poor, inner-city residents and was elected in part due to her deep community roots in her Bedford-Stuyvesant neighborhood. Catapulted into the national limelight due to her race, gender, and larger-than-life personality — Chisholm was also the first Black woman to campaign for the Democratic Party presidential nomination in 1972. Her slogan — “Unbought and Unbossed,” captures her fierce self-determination and independent spirit. But she was plagued by sexist and racist opposition from within and without, and failed to win her party’s nomination, losing to anti-Vietnam War crusader Senator George McGovern.

Born in Brooklyn, November 30, 1924, Shirley Anita St. Hill was the eldest of her four sisters. Her mother, Ruby Seale St. Hill, was a seamstress from Barbados, her father, Charles St. Hill, a factory laborer from Guyana. For part of her childhood, Chisholm lived on her maternal grandparents’ farm in Barbados, receiving a British education, while her parents toiled to make a living during the Great Depression. Her time in the West Indies gifted Chisholm with a slight, clipped British accent, which she kept her whole life. Chisholm graduated with high marks from public schools in Brooklyn and was accepted to Vassar and Oberlin colleges — but attended Brooklyn College on scholarship and graduated cum laude, with a Bachelor’s degree in sociology in 1946. In 1949, she married Conrad Q. Chisholm, a private eye (whom she later divorced, in 1977), and went on to earn a Master’s degree from Columbia University in early childhood education in 1951.

After working for several years as a nursery school teacher, and later as an educational consultant for New York City’s Division of Daycare, Chisholm pivoted into a career in politics. In the 1960s, she joined her local chapter of the National Association for the Advancement of Colored People, or NAACP, to join the growing fight against racism. But as it turned out, racism was not her only enemy. “I have certainly met much more discrimination in terms of being a woman than being black.” Eager for change, Chisholm also joined her local League of Women Voters group, the Urban League, and the Democratic Party club of Bedford-Stuyvesant, Brooklyn.

Her involvement with the NAACP and these other groups spurred Chisholm to run for New York State Legislature in 1964. She won — becoming just the second African American in New York to do so. And only four years later, Chisholm became the first African American woman to win a seat in Congress. In 1968, after a court-mandated redistricting created a new, heavily democratic district in her neighborhood, Chisholm seized the moment and made a historic run for Congress, kicking off what would be a seven-term tenure.

Roaming the new district in a sound truck that she would pull up outside housing projects, she called out to her community: “Ladies and Gentlemen … this is fighting Shirley Chisholm coming through.” She successfully capitalized on her ability to connect with people. “I have a way of talking that does something to people,” she said. “I have a theory about campaigning. You have to let them feel you.”

“Fighting Shirley” championed racial and gender equality, the plight of the poor, and was a staunch advocate for ending the Vietnam War, going on to introduce more than 50 pieces of legislation. Chisholm was a co-founder of the National Women’s Political Caucus and the Congressional Black Caucus — and in 1977, made herstory again by becoming the first Black woman (and second woman ever) to serve on the mighty House Rules Committee — a year that she also celebrated new love, marrying Arthur Hardwick Jr., a New York State legislator.

But it was her run for President, in 1972, that feels especially relevant today, as we continue to grapple with entrenched systemic racism and an avalanche of social justice activism. With Kamala Harris, our first-ever woman of color running as vice presidential candidate, we are closer than ever to realizing Chisholm’s vision. While her bid for President was ultimately unsuccessful, as an unwavering feminist with strong stances on civil and women’s rights, and support for the poor and working-class — Chisholm’s campaign captured hearts, minds, and vitriol. In her rousing speech in which she announced her candidacy, she exclaimed, “I am not the candidate of Black America, although I am Black and proud, I am not the candidate of the woman’s movement of this country, although I am a woman and I am equally proud of that.”

Her famous slogan, “Unbought and Unbossed,” personified a powerful and defiant campaign that sought to speak truth to power despite the Congressional Black Caucus’s unsupportive male members. Prominent African American politicians and activists Jesse Jackson, Carl Stokes, Julian Bond, and John Conyers Jr. each put the strength of their support behind her white, male opponent — George McGovern. Sexism and disbelief that a woman could actually win marked their flawed rationale behind their stance. Her response cuts deep to this day, “Black male politicians are no different from white male politicians. This ‘woman thing’ is so deep. I’ve found it out in this campaign if I never knew it before.” While she did not win the Democratic nomination, Chisholm gained national recognition, appearing on 12 national primary ballots, receiving 10% of the delegate vote, proving that her brave run had indeed won hearts and minds. During her campaign for President, she survived three assassination attempts, showing that she also scared people by boldly going where no Black woman had gone before.

Chisholm retired from Congress in 1983, going on to teach at Mount Holyoke College. In 1991, she made Florida her home, after declining to become US Ambassador to Jamaica due to poor health. She was inducted into the National Women’s Hall of Fame in 1993. In January 2005, Chisholm suffered a series of strokes, dying at the age of 81. Forever a woman of firsts, even in death, she will be the first female ever to have a monument built in her honor in Brooklyn. Musing on her legacy, Chisholm said, “I want to be remembered as a woman … who dared to be a catalyst of change.