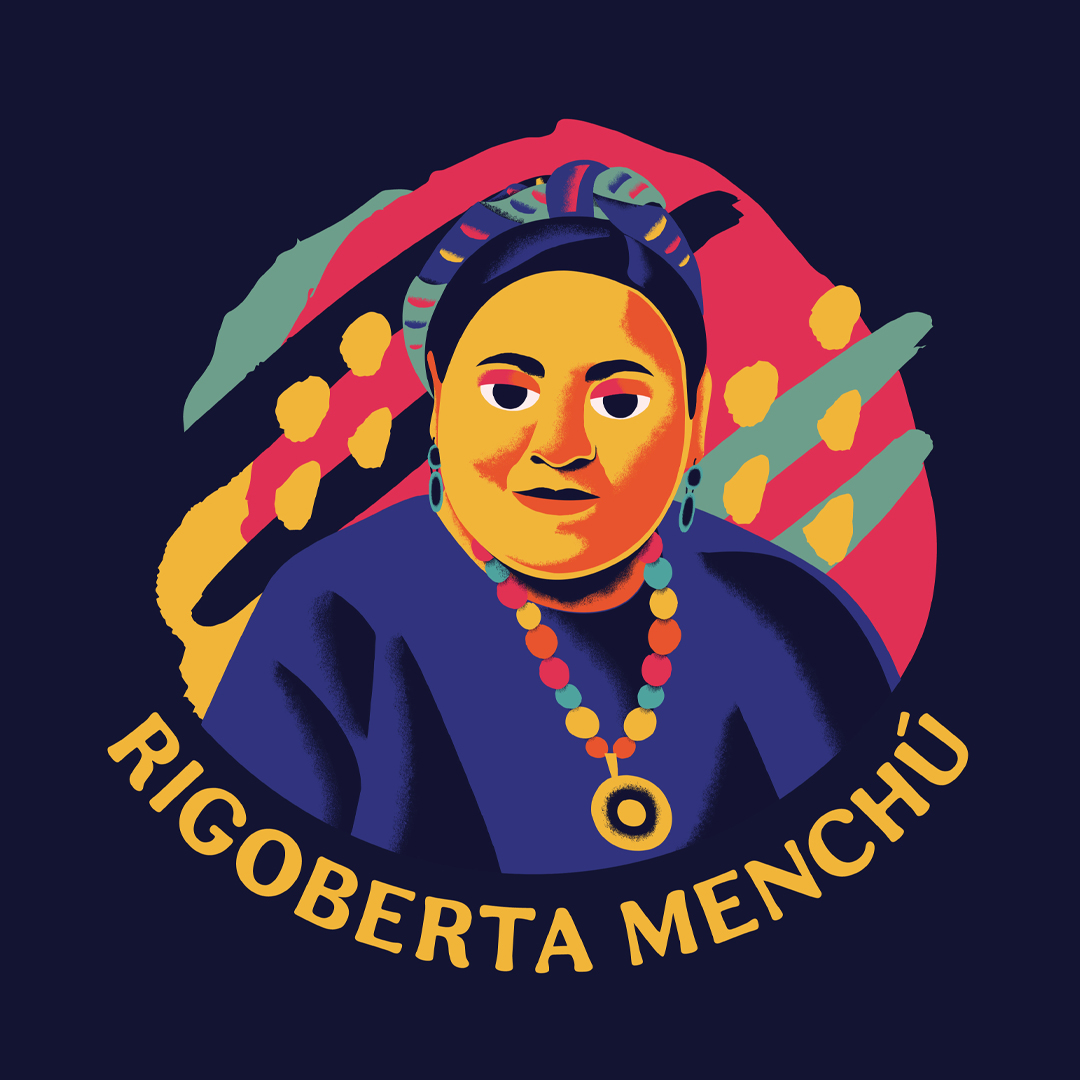 This National Hispanic/Latinx Heritage Month, Creative Circle is exploring histories, contributions, and experiences of Latinx and Hispanic people that are often left out of the news and history books. One of these remarkable individuals is Rigoberta Menchú, Indigenous activist who continues to dedicate her life to bringing awareness to human rights issues in her home of Guatemala and around the world.

Indigenous rights can be a touchy subject for American* colonizers. Looking back at the messy history of rape, illness, slavery, and genocide over the ownership of massive swaths of land, as well as an array of treaties that have been broken again and again. Furthermore, independence for European colonies across the Americas did not usually mean independence for the native populations.

During Guatemala’s grueling decades-long Civil War (1960-1996), Rigoberta Menchú grew into a young activist, an intelligent organizer, and a fierce defender of her people in El Quché, as well as indigenous groups all over Guatemala. Born into a family of community leaders, her parents settled on mountain land after being unable to sustain themselves on the land left to them after the Spanish conquest of Guatemala. Her father was an activist in his own right and was killed in the 1980 Burning of the Spanish Embassy. Her mother was later kidnapped, tortured, and killed by the Guatemalan Army.

To add some context, Guatemala, along with Honduras, was known as a “banana republic.” The Civil War began as a result of a 1954 coup d’état that was supported by the CIA, a common occurrence in the Cold War era. The instated president Carlos Castillo Armas was assassinated three years later and replaced with slew of military leaders that committed suppression, assassination of opponents, and a range of war crimes. When guerrilla groups rose up against the military regime, extreme violence pervaded the country, particularly targeting indigenous populations who were harshly discriminated against in all facets of society.

Despite her tragic early life, Menchú rose up and became an international advocate for the indigenous resistance in Guatemala. She fled to Mexico, began advocating on behalf of her people to the international community, and joined the United Nations Working Group on Indigenous Populations.

In 1982, she narrated a book about her life and the life of her people titled Me llamo Rigoberta Menchú y así me nació la conciencia, which was translated to five language including I, Rigoberta Menchu, An Indian Woman in Guatemala in English. She opens the book with “I’d like to stress that it’s not only my life, it’s also the testimony of my people,” as not all the stories come from her personal and family experience, but the experience of other indigenous Guatemalans.

She also spoke heavily of traditions and teachings from her Mayan mother from the interdependence of nature, to gender roles in Mayan culture, to the significance of the sun, as well as birth and death rites. Menchú noted how her mother encouraged her to speak out as an equal throughout the struggle for human rights:

“I don’t want to make you stop feeling a woman, but your participation in the struggle must be equal to that of your brothers. But you mustn’t join as just another number, you must carry out important tasks, analyze your position as a woman and demand a share. A child is only given food when he demands it. A child who makes no noise, gets nothing to eat.”

She attempted to return to Guatemala in 1988 but was threatened with jail time and instead has to stealthily visit for very short periods of time. In 1992, Menchú won the Nobel Peace Prize. She opened her lecture with the following:

“I consider this Prize, not as a reward to me personally, but rather as one of the greatest conquests in the struggle for peace, for Human Rights and for the rights of the indigenous people, who, for 500 years, have been split, fragmented, as well as the victims of genocides, repression and discrimination.”

She goes on to call for social justice and the implementation of human rights in Guatemala, outlining the struggles of the indigenous population — which include exile, poverty (and the malnutrition, infant mortality and lack of education that come with it), and persecution by the army — and women’s struggles in particular.

To paint the picture of context once more, this was a woman in her early 30s, who was living in exile of her home country after her immediate family were all killed, speaking with grace and poise about how to move forward and protect humanity’s most vulnerable populations from her home country to South Africa to the Middle East to Southeast Asia.

Menchú brought several heads of state to trial in Spain (and later in their homeland of Guatemala), including Efrain Rios Montt who despite being convicted of masterminding indigenous genocide and sentenced to 80 years in prison, never served any actual jail time. He was the first head of state tried for genocide in his home country.

Her international activism continues as a UNESCO Goodwill Ambassador, president of Salud Para Todos (Health for All), Nobel Women’s Initiative, PeaceJam, and Foundation Chirac. In her positions, she has advocated for shortening the patent life of AIDS and cancer drugs to increase availability, advocated for women’s rights around the world alongside fellow Nobel Prize winners, mentored youth, and otherwise promoted world peace.

To this day, she continues to speak out against inequality, climate change, and injustice, most recently focusing on the turmoil in Venezuela. Her remarkable resilience, courage, and compassion remain an example to humanity of the potential of a single life.

May her legacy continue to inspire movements.

*As in those who settled in North, Central and South America and the Caribbean