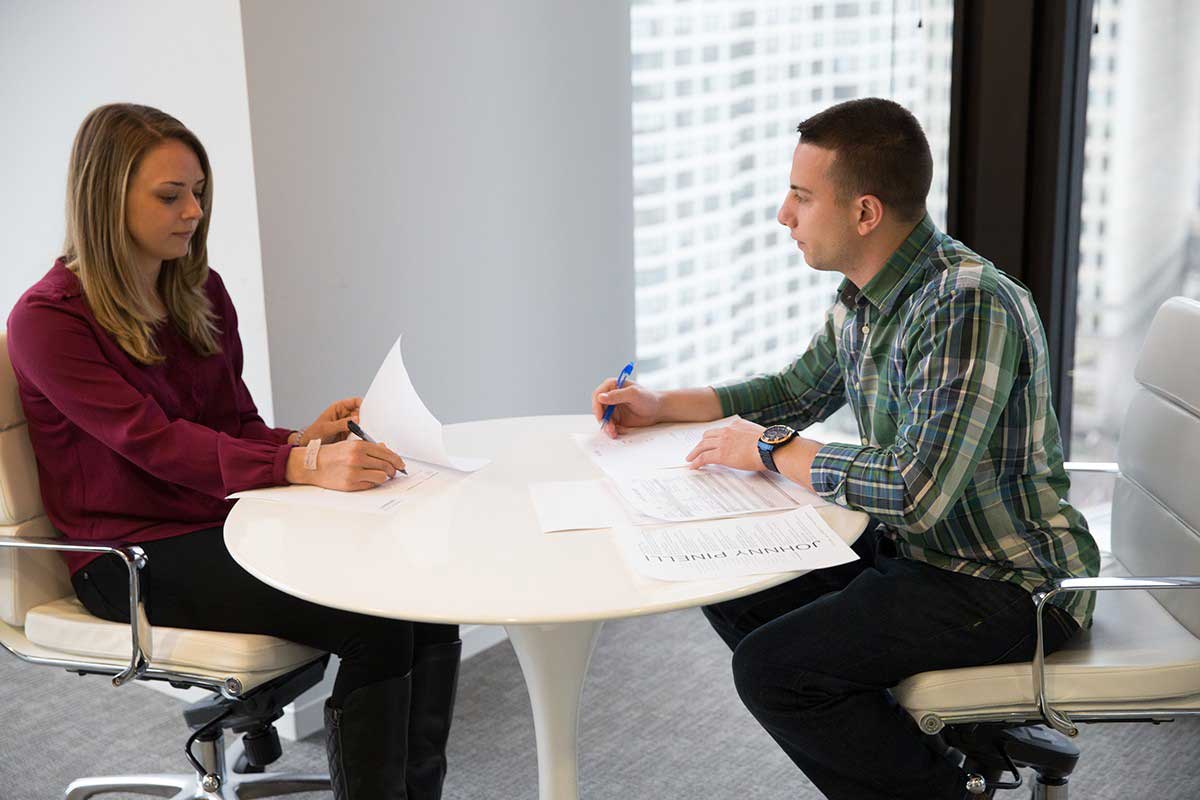 What’s your best line? I usually have good luck with the one where I compare my career trajectory to that of a grandpa’s: you start out sweeping the floors of a company, and you work your way up the ladder until they give you a watch after 15-odd years. (It started as an internship and I left with a pewter flask, but you get the idea.)

Job interviews are like Tinder dates except extremely worse, because it’s usually 9:30 a.m., there’s no booze anywhere, and it feels like the whole of your tiny life is being held—ready to be crushed—in the palm of a stranger’s hand. Go to enough of them, and you start recycling your material. Practicing it. Perfecting it, like a comedian making open mic rounds before hitting the big clubs. If there’s anything “awesome” about interviewing for a job you don’t get, it’s that practice. Your nerves are going to do their thing in these situations whether you like it or not. The better you have your lines rehearsed, the easier they’ll roll off the tongue without having to fight through your anxiety to find the right words.

When you’re job-seeking — including saying hey to a roster of prospective new freelance clients — you’re having a lot of these conversations, just as you’re having a lot of awkward drinks with strangers if you’re working the singles scene. Although these types of interactions are typically — literally — the difference between night and day, they share one crucial component: chemistry.

We’ve all been on a vaguely awkward date. Afterward, your friends ask about it and you say something like, “Oh, it was fine…” or “They were nice, but…” The missing component that takes either of this circumstances from “meh” to “promising” is hard to pinpoint; it just works, or it doesn’t. No matter how well you match up on paper (You have the B2B experience they’re looking for! You both like dogs!), if they don’t like your tone, or they don’t get your jokes (the worst), or you fail to convince them of your interest in who designed the atrium of their agency’s new offices, things can start to feel tainted, fast.

Of course the flip side is that all of this is mutual. It’s natural to feel like it’s on you to be the impressive one in an interview setting, but it’s helpful to realize that’s not entirely the case. After all, how badly do you want to work with someone who doesn’t think you’re funny, or isn’t all that friendly? You probably wouldn’t put that much pressure on yourself when heading out on a blind date. You’d brush your hair and make sure that there isn’t anything stuck between your teeth, and you’d do your best to be charming and smart, but you’d expect a similar show of effort on your date’s part.

Yes, it’s important to put your best foot forward in dealing with a prospective employer. But if it doesn’t work out — and you get that sinking feeling mid-interview, though sometimes it’s from the start — you might also consider the fact that you’ve also dodged a bullet. You won’t benefit from being in an unhealthy, tense relationship with a boss or a client any more than you would be in a relationship where one or both of you aren’t totally feeling it. You’d end up feeling under-appreciated or burdensome, and even worse, it would chip away at your confidence, which is by far your most valuable tool in any setting.

I used to think all interviews were pretty awkward by nature until I had one that wasn’t — at all. I left on a high, like I’d made a new friend… and not to muddy the water too much but yeah, like I’d been on a really promising first date. Fast forward and I’m two weeks into a freelance gig of indeterminate length at his offices, with the possibility of full-time work a subject of open dialogue.

Whoever said that you have to kiss a few frogs before finding a prince wasn’t talking about a job interview, but I’d argue it’s just as applicable. You have to have a couple of ill-fitting encounters before you can strike up a business relationship that might have long-term mutual benefit. And, when it comes to the ones that end badly, just think: It’s not you, it’s them.