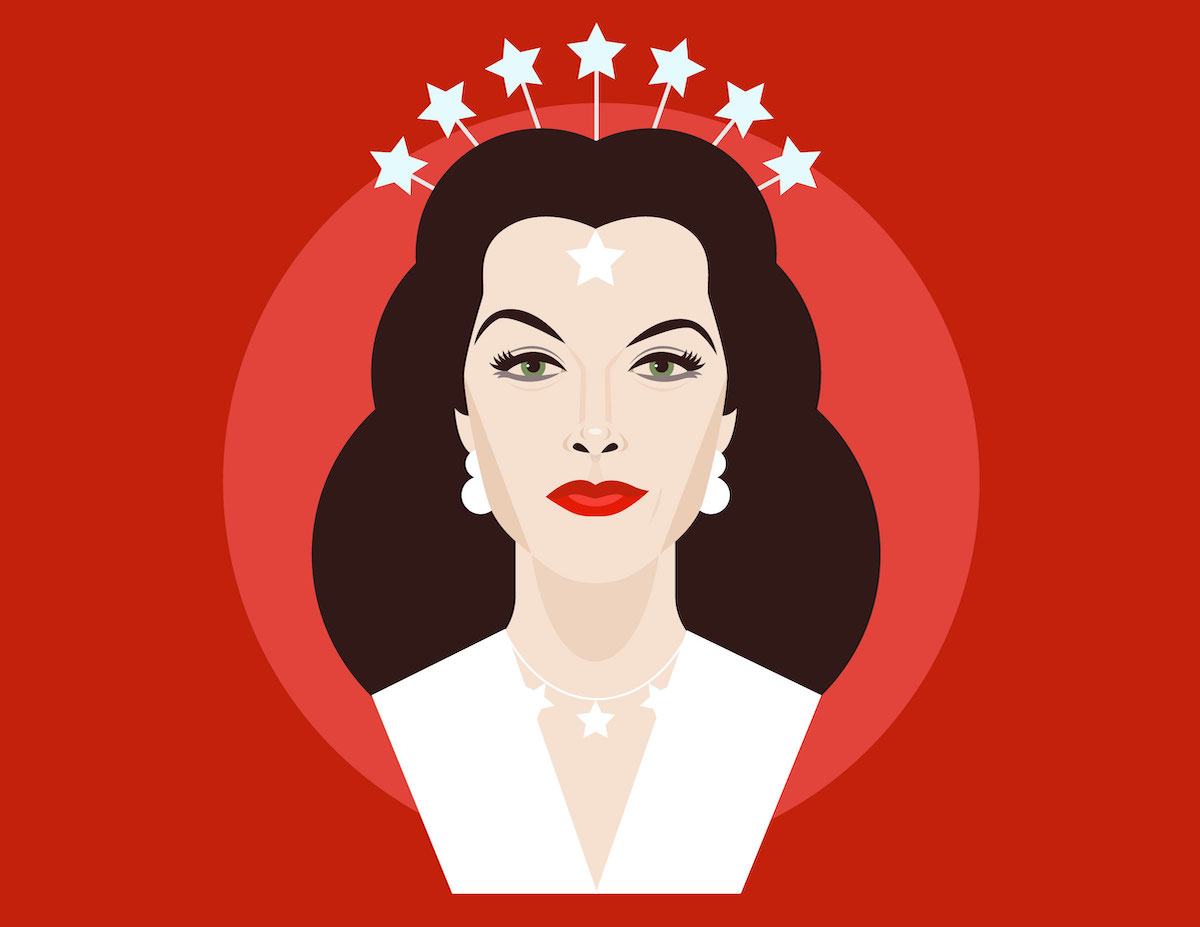 In celebration of Women’s History Month, which has been muted by the global novel coronavirus pandemic, we are honoring women in history that have contributed in ways that continue to impact our lives at this very moment in time.

Known as “the most beautiful woman in the world,” the legendary Hollywood icon Hedy Lamarr, star of Ziegfield Girl and Samson and Delilah, was featured in more than 30 films over her 28-year career — but there was more to her than meets the eye. Born Hedwig Eva Maria Kessler (1914-2000) in Vienna, Hedy Lamarr was many things: a hardworking actress, prolific producer, wife (6 times over!), mother. What you might not know is that she was also an ingenious inventor, engineer — and mother of WiFi, GPS, Bluetooth, and other wireless technologies. Digital nomads and remote workers have Hedy Lamarr to thank for their connected existence.

Before arriving in the United States, a 19-year-old Hedwig had been married to Fritz Mandl, a wealthy, domineering, Austrian munitions manufacturer who sold arms to the Nazis. While with him, she had been privy to high-level conversations about weapons design that later came to inform her most important invention. She fled to the United States in the 1930s disguised as a maid, signed a contract with Metro-Goldwyn-Mayer Studio, and became the Hollywood box-office sensation: Hedy Lamarr.

But despite her international stardom, Lamarr was bored with life as a screen star. She devoted a room in her home as her lab for inventing — and worked away at her drafting table instead of making the Hollywood party rounds. She was prolific. Her first invention was a fizzing tablet, which dissolved in water to make a carbonated drink. She sketched blueprints for new machines. Deciding that “airplanes were too slow,” she drafted a biomimetic design for the wings of her lover Howard Hughe’s racing plane — inspired by her study of the fastest fish and bird. Lamarr invented a tissue-box attachment to hold used tissues, a new type of traffic light, and a device to help movement-impaired people get in and out of the bathtub. But her greatest invention was born one sultry summer night in 1940 when Lamarr met her Hollywood neighbor, the avant-garde composer George Antheil. The two shared a passion for creating and a deep curiosity for discovering how things work.

In 1942, at the height of both her career and WWII, they created a “frequency-hopping system” inspired by Lamarr’s knowledge of weapons design and Antheil’s of musical instruments. This secret communications system (patented in 1942) manipulated radio frequencies at irregular intervals, preventing classified messages from being intercepted by the enemy. Although her ideas were ignored at first, the technology was later used by the military during the Cuban Missile Crisis in 1962 — and later formed the fundamental structure of devices we rely on today — like wireless internet, GPS, fax machines, and Bluetooth.

She received very little credit for her achievements — until recently. In 1997, The Electronic Frontier Foundation bestowed her the Pioneer Award, and in 2014 — fourteen years after her death — she was inducted into the National Inventors Hall of Fame. Lamarr also became the first woman to be awarded the Invention Convention‘s BULBIE Gnass Spirit of Achievement Award. Lamarr never made any money from any of her inventions — “frequency hopping” alone is thought to be worth some tens of billions of dollars — but the United States military has publicly acknowledged her contribution to this enduring technology.

Pioneer. Movie star. Inventor. Scientist. Icon. Hedy Lamarr invented the underpinning technology that makes our smartphones and WiFi work. Basically — we might not be WFH today if it were not for Hedy Lamarr.

“Hope and curiosity about the future seemed better than guarantees. That’s the way I was. The unknown was always so attractive to me … and still is.”
Hedy Lamarr

If you want to learn more, check out Bombshell: The Hedy Lamarr Story.