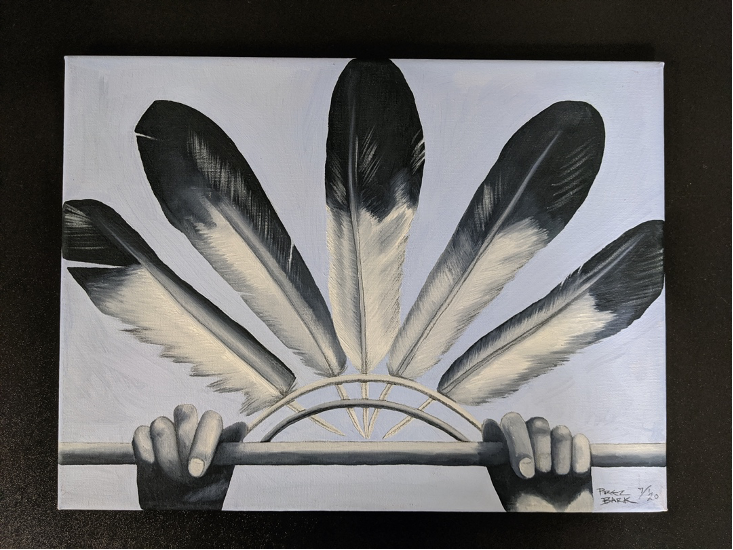 … we have to understand that the colonies here in Massachusetts were not peaceful. They were colonial. They were fearful and they were aggressive and they harmed many, many, many indigenous peoples.

Thanksgiving is my mother’s favorite holiday. We have a time-honored tradition of making my great-grandmother’s stuffing recipe while singing along to Christmas carols in the kitchen (although I’m pretty sure one year we shifted to Disney soundtracks). Cubans love America hard, and so my assimilated family embraced this tradition especially hard.

The older I got, and the more I learned about America’s brutal history with the Indigenous peoples that lived on Turtle Island before colonies, territories, and eventually states took hold, my love of the holiday started to wane.

More recently, Indigenous history and stories have become part of the narrative. Indigenous People’s Day became a holiday, and now, we’re honoring Native American Heritage Month in November. So how do we even begin to integrate this newfound acknowledgement with our perception, language, and practices?

Let’s break down myths, misconceptions, and points of confusion about Thanksgiving. But before we dive in, I want to acknowledge that I’m writing this from historically Hohokam, Sobaipuri, Tohono O’odham, and O’odham Jewed land, although I typically reside on Taino, Tequesta, and Seminole land. (To learn whose land you’re on, check out Native Land).

There is a bloody truth to Thanksgiving.

Poet, speaker, and scholar Lyla June shared the story in 2019. You can watch the full talk here, or read a small excerpt below:

You know, during the time that we talk about Squanto coming and helping the pilgrims and healing them and helping them understand how to plant food, how to survive on the land, he was also being kidnapped and sold into slavery in Europe only to come back here, and to find his entire nation completely obliterated by smallpox. So this man who gave a lot of compassion to people ended up getting sold into slavery.

A really important thing too, is that in 1637, when you have the governor of the Massachusetts colony, John Winthrop — this is only 16 years after the supposed Pilgrim feast with the native people — he declared the first day of Thanksgiving, but it wasn’t for what we think it was. It was actually after the massacre of hundreds of Pequot people down in Connecticut. And the Thanksgiving feast was to thank God that all of his soldiers had returned from this massacre.

They massacred hundreds of Pequot men, women, and children. So we have to understand that the colonies here in Massachusetts were not peaceful. They were colonial. They were fearful and they were aggressive and they harmed many, many, many indigenous peoples. And that’s really, really important for us to understand so that we don’t rose-tint the history that we stand on.

Now that we have this really uncomfortable misconception out of the way, let’s dig into daily life.

There are a range of ways to describe Native Americans, and an equal range of preferences.

So what words can we use during these conversations? The answer varies across individuals, nations, and situations. These are notes I’ve gathered from this webinar held by the Native Governance Center. As they mention, this cannot provide the preferences of every single Indigenous person, but can be a general guideline for the public.

Indian Country is an official term used to describe land inhabited by Native Americans and is widely used by them as well as government officials.

American Indian vs Native American vs Indigenous vs First Nations

Indian and American Indian seem to be the least preferred (although among themselves they may colloquially use the term). Native American and First Nations are specific to the U.S. and Canada respectively and tend to be the preferred formalized words when referring to populations in general. Indigenous encapsulates all Indigenous peoples worldwide, so while another highly accepted term, it is more general.

The coopting of this word has killed the vibe, so maybe meditate on how you use this world in your daily life. (There are plenty of other words that have weird histories, like “pow-wow” — not a casual meeting but a sacred ceremony.)

While the land allocated by the US government is known as reservations, many members and citizens prefer to be referred to as Nations, since they do have their own sovereign government.

Most Indigenous peoples do not receive monthly checks, and those who do don’t get them from the U.S. government.

I spent a few months last summer working with an electrician who went on and on about his Native American friend who received monthly checks, which he took to mean that Native Americans have it so good in this country. That there are some sort of reparations going on. Certain that there was a misunderstanding, I found this helpful breakdown of where the confusion lies.

What my electrician misunderstood was two things. First, his friend was a member of the Florida Seminole Tribe of Florida (not to be confused with the Seminole Nation of Oklahoma, who come from the same origins but have very different opinions of the use of their namesake). The Seminoles have casinos, and the profits of those casinos are distributed among tribal members. The money does not come from the government, but the tribe’s own economic ventures.

The vast majority of Tribal Nations do not have lucrative casinos or other economic ventures that supply surplus funds. In fact, the rates of extreme poverty are much higher on reservation territory than anywhere in the country.

In fact, the Navajo Nation has some of the highest rates of poverty in the country. A Diné photographer and tour guide explained the situation as such:

When driving through the Navajo Nation you’ll find that the neighborhoods that are considered “rich” or “wealthy” would be considered poverty-stricken off the Navajo Nation. It’s not because our people don’t strive for better lives, but truly because the systems that work against them. Many times if you read through posts on TripAdvisor about the homes on the Navajo Nation, you will see complaints about the shacks or state of homes as it ruins the views. It’s terrible, but that is just simple life on the reservation.

He also explained how starting businesses is more challenging when you have to navigate tribal, state, and federal laws, making economic advancement even harder.

On top of that, property rights are still rather contentious when it comes to buying back tribal land and claiming sovereignty, as Justice Ginsberg upheld in 2005.

Spirit Animals and Teepees and Appearance, Oh My!

I know. It’s so fun to say. I have certainly claimed spirit animals thought out my life, but as I’ve learned, I’ve worked to change my behavior. Much like headdresses, spirit animals are part of sacred ritual. Cowlitz Indian Tribe Member Joey Clift offers a simple alternative. Why not call that animal your Patronus instead? We have a fictional alternative that could satisfy that same desire!

And finally, expecting every Native American you meet to look like they came out of an old west film is weird. They are modern humans living modern lives with a range of appearances. Honestly, telling anyone they don’t look like whatever it is they are is weird. I know, I get it all the time. “You don’t look Cuban.” How is a person of Cuban descent supposed to look exactly?

Indigenous women are 10x more likely to be victims of homicide than the average American.

This isn’t a new phenomenon. This is embedded in the way that Indigenous people have been treated historically in this country. From broken treaties to boarding schools that cut children off from their families, cultures, and their lives. Earlier this month, 102 dead students were discovered in Nebraska.

The Biden administration has taken steps to address the myriad of atrocities, but it will take a lot of time to make amends here.

For additional information and resources, you can look here and here.

Media depiction of Native practices don’t quite line up with the spiritual and religious reality.

Rituals like dancing around fires, smudging with sage and other herb, chanting, and various form of regalia aren’t just for fun but for ceremonial purposes. Most the songs that are chanted aren’t just songs but prayers.

And Native American freedom of religion wasn’t legalized until 1978. That’s right. That smudge stick you can buy at Urban Outfitters, the fake regalia you can pick up at a costume shop, was illegal for Native Americans to practice with until 43 years ago. Imagine if it was illegal for your parents and grandparents and great-grandparents to practice your religion in the country you grew up in. (This may ring too familiar for our Jewish friends in the audience, which reminds me that Hitler’s inspiration for concentration camps was in fact the Native American reservation system.)

In spite of the tragedy, oppression, prejudice, and injustice, there is still so much we can learn about how to move forward.

Earlier this month, I listened to a conversation organized by Collective Idea Lab which featured Lyla June, Michelle Schenandoah, and Neal Powless. While the conversation spanned many topics, I was struck by the way they discussed “the technology of forgiveness.”

Powless asked, “Would you be willing to forgive someone who ate your uncle?” Because that’s what his ancestors did in order to forge peace and alliance on this continent before any colonizer appeared. Unfortunately, that kind of radical forgiveness will be required again.

They also highlighted that before colonizers started murdering Indigenous and African folks, they were murdering each other. The world has a long and bloody history, and it has affected all of us. Whatever your lineage, most of us hold a mix of colonizer and colonized at some point in our ancestral history. I don’t what to tell you what to do with that information, but there is heartbreak and power there. Maybe just sit with it or talk about it.

They also brought up a Haudenosaunee (also known as Iroquois) ritual of greetings and thanks known as the Thanksgiving Address. They are known as “the words that come before all else.” Perhaps you could use it as a jumping off point for thinking about what you might be grateful for this year. Things that our minds may not always think of. Like the insects and blades of grass. You can also listen to it here. Consider it an exercise in shifting perspectives and digging deeper.

About the author. Alessandra is the mentor, educator, and writer behind Boneseed, a private practice devoted to deep self-inquiry through a range of physical, energetic, and mental modalities. She has over 500 hours of yoga, mentorship, and facilitation training and can be found slinging knowledge on her website, newsletter, and @bone.seed.