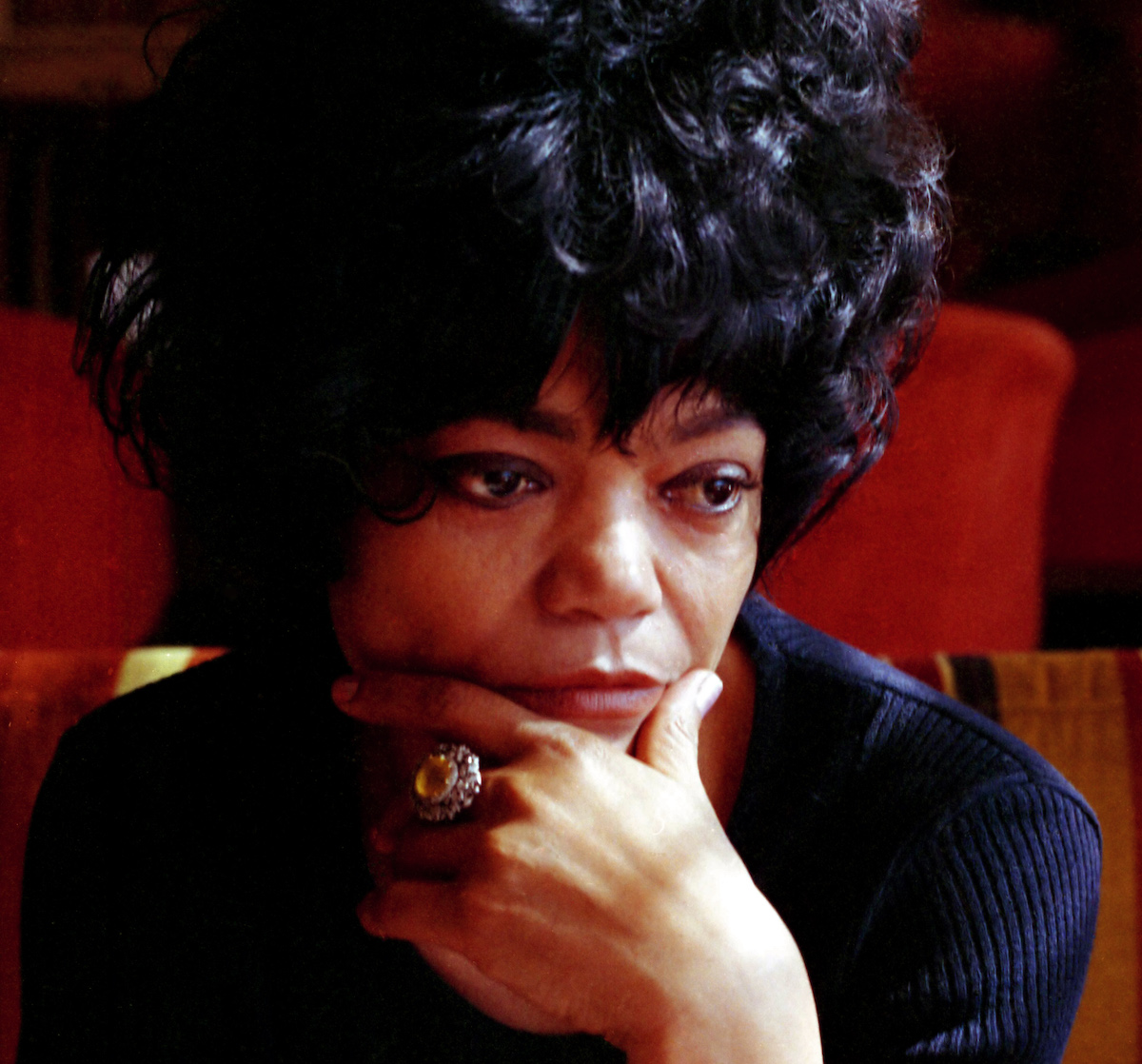 Most widely known as the Catwoman to Adam West’s Batman, the originator of the beloved holiday tune, “Santa Baby,” and to a lesser extent for voicing Yzma in The Emperor’s New Groove, Kitt’s life and legacy extend far beyond these notable marks on popular culture.

Born in 1927 to a Black and Cherokee mother on a plantation in South Carolina, Eartha Kitt never learned the identity of her father, who likely raped her mother. It was said he was the son of the plantation owner, but all her attempts to verify his identity were inconclusive. She only learned her true birth date (January 17 instead of what she always put down, January 26) 10 years before her death.

As a child, she was handed off to various relatives by whom she was often abused. In one interview, she describes being tied to a tree and sexually assaulted by teenagers, in addition to the abuse she experienced at home. After her mother died, which Kitt believed was murder, she was sent to live with an aunt in New York.

In her teens, she won a full scholarship to a dance company she auditioned for on a lark and tumbled her way into show business as a dancer. Her first big acting role was as Helen of Troy opposite Orson Welles in his rendition of Doctor Faustus, during which time he famously dubbed her “the most interesting woman in the world.”

The Most Interesting Woman in the World

Known for her distinctive vocals, Eartha had a wave of hits throughout the 50s including “I Want to Be Evil,” “C’est Is Bon,” “Monotonous,” “Love for Sale,” and the holiday favorite, “Santa Baby”. Kitt spoke in English, French, German, and Dutch, but additionally sang in Spanish, Swedish, and Turkish.

In a 1993 interview on The Whoopi Goldberg Show, Kitt discussed the colorism she experienced in her childhood that followed her throughout her career. As a child, she wasn’t quite white or Black enough to be accepted by her peers. Later, when she starred in Anna Lucasta in 1958 opposite Sammy Davis, Jr., hundreds of theaters refused to show the film because she looked too light on screen opposite the darker skinned Davis.

She also shared how as a dancer in an all-Black troupe, she had to use the back door and go in through the kitchens, but once she started performing on her own, her contracts declared she would waltz in through the lobby.

Kitt thrilled audiences in successful run at the Persian Room, but her agents chided her for being “too sophisticated” for the Apollo Theater and asked her to change her act before moving on to another theater show. Kitt took this as an insult, particularly toward Black audiences. She didn’t change a thing, and her three shows a week turned to five as audiences lined the block to see her.

After years of successful singing and stage work, Kitt pounced onto television screens in a role that seemed to be written for her despite not originating it. She became the third — and most beloved — Catwoman in the Adam West-led Batman series in 1967. While she only appeared in a handful of episodes, they were some of the most memorable of the series.

In Defense of the Children of America

The following year, Lady Bird Johnson invited Kitt and 49 other women to a luncheon at the White House meant to discuss the question “Why is there so much juvenile delinquency in America?” and explore how women could contribute to a solution. Kitt was working with a group known as Rebels with a Cause and spent her life working with “inner city kids,” eventually founding Kittsville Youth Foundation, which continues to operate under the direction of Wanda-Lee Evans.

At the First Lady’s insistence, Eartha attended the luncheon that would terminate her ability to perform in the United States for a decade. President Lyndon B Johnson appeared as a surprise guest and new audio of the conference found at the LBJ Library in Austin, Texas in 2000 revealed the following change between Kitt and the president:

Kitt: “Mr. President, you asked about delinquency around the United States which we are all interested in and that’s why we’re here today. But what do we do about delinquent parents? The parents who have to go to work for instance who can’t spend the time with their children that they should. This is, I think, our main problem. What do we do with the children then, when the parents are off work?”

LBJ: “Well, that social security bill we just passed this year sets up millions and millions of dollars for day care centers… that’s one step we’ve taken. And that comes from… that’s approved by a bunch of men who are really not the best judges of how to handle children otherwise. I think that’d be a very good questions for you to ask yourself, and the women here, and you all tell them what you think.”

Later, Lady Bird finally did ask for her thoughts, and I’ll let her words speak for themselves.

You send the best of this country off to be shot and maimed. No wonder the kid’s rebel and take pot.”

She explained how many young men saw delinquency as a way out of being sent off to war, and that America should be focused on fighting for itself, inside its borders. After her respectful and insightful commentary was reframed as a disrespectful outburst, things changed for Kitt. The car that was supposed to take her back to her hotel disappeared, and within weeks, so did her job opportunities.

LBJ called the FBI and demanded they find something on her. When they came back with confirmation that she was an upstanding citizen, he called upon the CIA, who began collecting interviews and information for a dossier. For venues and producers, the choice became pass over Eartha Kitt, or have the CIA knocking on your door. They overwhelmingly chose the former, and opportunities dried up in the US. The pain of being cast out for exercising her right of free speech in her beloved country was a wound she carried the rest of her life.

For over a decade after the “White House incident,” Kitt focused her sights elsewhere, performing in Europe and Asia, where jobs were more plentiful away. Years later, Kitt was cast as Carlotta in the West End production of Follies where she sang the showstopper, “I’m Still Here,” a phrase that rang especially true through Kitt’s performance.

The tides turned again for Kitt in 1978 when she was invited not only back to the White House by Jimmy Carter, but to star in Timbuktu!, an all-Black resetting of Kismet that takes place in 1361 Mali. Her opening number, “In the Beginning, Woman” presented her on a human platter to an adoring audience as she proclaimed, “I’m Here,” in a triumphant homecoming. In a later interview on a show called Speaking Freely, her voice carries the weight of emotion, explaining how she knew she was home when, “the audience gave me a standing ovation before I could even open my mouth.” This performance presented her first Tony nomination. Later that year, Jimmy Carter invited her to the White House and officially welcomed her home.

Her career started building momentum with a series of acting (and voice-over) and singing performances, including disco hit “Where Is My Man?” and this banger of a tune, “I Don’t Care” in the mid 80s. She made appearances on range of shows from The Nanny to Jeopardy! and appeared at many benefits to support HIV/AIDS organizations.

She also kept speaking up about systematic racism and injustice, and advocated for keeping industry within the United States: “We have billions of dollars to go to the Gulf, why don’t we have billions for the people on the streets? For the boys who went to war and fought for this country? Maybe I am bitter. I thought we had freedom.” In that same interview with Whoopi Goldberg, she dispels the myth of the “welfare queen” that started gaining traction in the Reagan era:

“We don’t want to be on welfare. We want jobs. I have dignity and respect for myself and this is what I feel about every one of us in the United States as well as the rest of the world, but if you’re going to pay people to stay poor, why not stay poor? And if the job only pays as much as the welfare, you have to pay taxes on the job, but you don’t have to pay taxes not on the welfare.”

Sadly, her words still ring true today in the midst of COVID relief and unemployment spikes.

In her Speaking Freely interview, she exclaimed, “At 70, life has just begun… I’ve had more fun being Eartha Kitt I think than anybody else has had being themselves, whoever they have become.” She also advocated for the importance of education, speaking up, and kindness: “Speak out and do unto others as you would have them do unto you.”

Life was abundant for Kitt in her 70s when she made regular appearances on The RuPaul Show, declaring “I don’t have a secret, I just do what comes naturally. I was born this way, darling,” in her seductive purr. She also earned her second Tony Nomination for her role as Dolores in La Chiusa’s The Wild Party.

In the early 2000s, she found a new audience in a younger generation as the voice of Yzma in The Emperor’s New Groove (2000) and later The Emperor’s New School for which she won two Daytime Emmys. She also appeared in Holes (2003), and various other children’s shows as a voice actress.

Kitt died on Christmas Day in 2008, succumbing to a battle with colon cancer, but not without a fight. According to her daughter, Kitt Shapiro, who worked with her mother throughout her life, she died “screaming at the top of her lungs,” leaving her life the way she lived it.

The Legend Lives On

Years after her death, her iconic performances and interviews still make the rounds of social media, particularly this interview where she cackles at the thought of compromising for a man. She reframes the idea of a relationship for the almost incredulous male interviewer: “I fall in love with myself, and I want someone to share it with me.” When asked if that has ever happened, she replied, “many times, in many different ways.”

Kitt attributed her success to her hunger, both literal and figurative, and her practical, almost zen-like attitude toward life.

“Life is not problematical but we make it problematical because we listen to other people and we don’t listen to ourselves. For instance, we buy a lot of junk that we know we don’t need. We clutter up our lives with insignificant things that have no value at all but when we start to think about how simple life is and how simply It should be lived then we begin to realize; I have no problem. I don’t have a real problem. Problem is something you make. Life is something you live.”

Her legacy continues through the countless performers she has influenced, the Kitsville organization, and the trail she blazed for women of color — and champions of justice and decency everywhere.