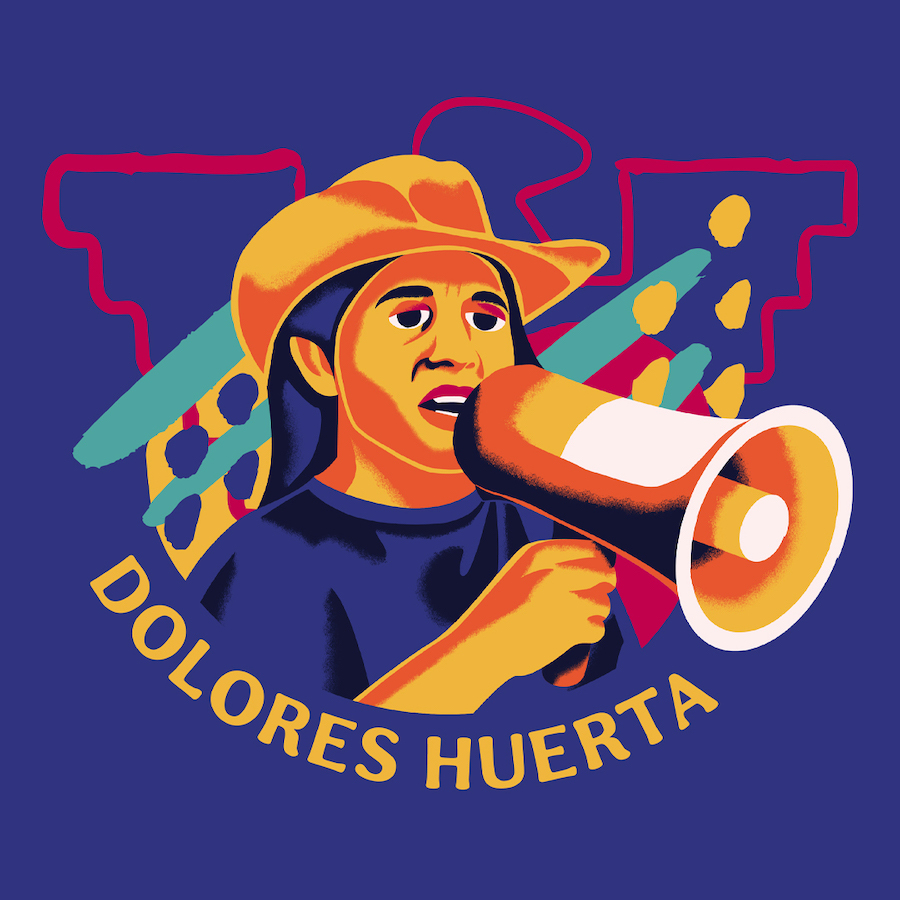 This National Hispanic Heritage Month, Creative Circle is exploring histories, contributions, and experiences of Latinx and Hispanic people that are often left out of the news and history books. One such person is Dolores Huerta — a Chicana labor leader whose contributions rival those of the most celebrated civil rights activists in U.S. history — but whose legacy is considerably less known. A living legend of the labor movement, and tireless advocate for social justice for more than 50 years, Huerta was awarded the Presidential Medal of Freedom in 2012 by President Obama and has been the recipient of nine honorary doctorates.

Backbreaking labor under an unforgiving sun, sleeping in dirt-floor shacks, dozens of men to a room, all for below-poverty wages — it was a brutal and hardscrabble life for farmworkers in the early 20th century, most of whom came from south of the Rio Grande. That is, until Dolores Huerta, and other crusaders like her, came along. In 1965, Huerta founded the United Farm Workers — an organization that, to this day, works tirelessly to safeguard and improve working conditions for migrant farm laborers. Despite immense adversity, facing rampant racism and sexism both outside and inside her organization, Huerta was instrumental in bringing about important legislation that protects vulnerable farmworkers through boycotts, picketing, protesting, and lobbying — taking power to the people and making real change happen.

Dolores Clara Fernandez was born on April 10, 1930, in Dawson, a small mining town in the semi-arid mountains of northern New Mexico, which is today an abandoned ghost town. Her father, Juan Ferånández, a farmworker and miner, was also a union activist who ran for political office, winning a seat in the New Mexico legislature in 1938. Her father’s political and labor activism inspired the path Dolores’ life would later take. But Huerta spent most of her childhood and early adult years in Stockton, California — where she and her two brothers moved with their mother, after their parents’ divorce when she was three.

Her mother, Alicia, became an active participant in Stockton’s community affairs — involved in various civic organizations and her church. Alicia’s community activism informed her daughter’s path. After high school, Dolores went to the University of Pacific’s Delta College in Stockton, earning a teaching degree. She married Ralph Head and had two daughters, Celeste and Lori (though she divorced soon after) and began to teach. Her students, however, would come to school with bare feet and empty stomachs, and it became too heartbreaking to bear witness to this extreme poverty without taking action — propelling her to become an activist for farmworkers’ rights.

When she was 25, Huerta became the Community Service Organization’s political director, run by the prominent community organizer, Fred Ross. It was there that she met César Chávez, with whom she teamed up in 1962 to form what later became the United Farmworkers Association. The UFA worked primarily with Latino laborers, as most migrant farmworkers were Mexican by the mid-20th century due to the Bracero program — an initiative that brought 4.5 million Mexicans to the United States to compensate for labor shortages in the agricultural and railroad industries caused by World War II. Later described as a form of “legalized slavery” by the Department of Labor official who was in charge of the Bracero program, workers experienced inhumane living conditions, exploitative labor practices, and appalling racist and sexist violence. These workers, however, found an ally in Dolores Huerta.

In a 2017 interview with NPR, Huerta shared that migrant farmworkers “didn’t have toilets in the fields, they didn’t have cold drinking water. They didn’t have rest periods.” These farm laborers only earned about 70 cents an hour at the time — 90 cents was the maximum wage paid. The farm workers toiled from sunup to sundown, but lived in shacks with dirt floors despite how hard they worked, their furniture cast-off fruit crates and cardboard boxes. The children were ill-fed and ill-clothed, often suffering from malnutrition. It was an inhumane existence — the sheer brutality of which galvanized her work with César Chávez, and together, they fought for the rights of these dispossessed workers.

Chávez, however, often occupied the spotlight, receiving much of the credit for their joint work. Despite Huerta’s indomitable skills as an organizer and shrewd negotiator being essential to their success, she faced extensive sexism within the movement and disdain from those who believed she belonged at home with her children, rather than on the frontlines, fighting for justice.

In 1965, the grape pickers went on strike, and Huerta was the leading political organizer. But she faced violence on the picket lines and sexism from all sides: the growers she was railing against and their allies — and as well, from within her own organization. A politician derisively described her as Chávez’s “sidekick.” The feminist movement was in its nascent years and Huerta was an unconventional character — twice-divorced and the mother of 11 children. Huerta’s opponents weaponized this as inflammatory propaganda, asking who supported her children when she was “out on these adventures?” But in the words of Elizabeth Warren, she persisted. After five trying years, the United Farm Workers signed a historic agreement with 26 large grape growers. Huerta successfully turned a nationwide consumer boycott of grapes into better pay, healthcare, unemployment benefits, and labor protections for thousands of farmworkers.

While her role in the farmworkers movement has long been overshadowed by that of Chávez, President Obama awarded her the Presidential Medal of Freedom in 2012, and credited Huerta for coining the famed UFA battle cry Si se puede! — Spanish for “Yes, we can” that inspired Obama’s campaign slogan — which has so often been wrongly attributed to Chávez.

At age 90, Dolores Huerta continues to be outspoken and determined — a living labor and civil rights icon, a social justice activist for most her life, fighting for better protections and work conditions for the farmworkers that pick our food. To this day, through her Dolores Huerta Foundation, she continues to work with agricultural communities, helping organize people to run for office — a lifelong advocate for health, education, and economic development for all.