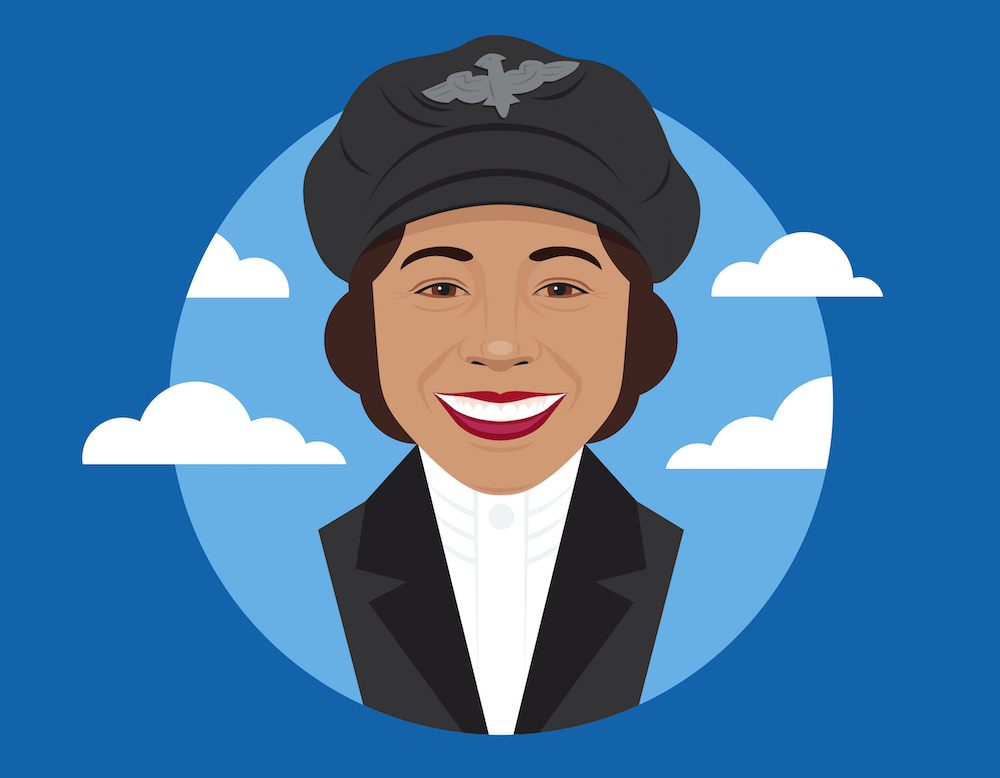 After 110 years, the U.S. Navy finally has its first Black female tactical jet pilot! Her path was paved by the iconic Bessie Coleman: the first BIPOC female pilot, who saw aviation as a way to empower women and people of color in the United States.

Born to poor sharecropper parents in 1892, Bessie Coleman, one of 13 children, had a hardscrabble childhood in rural east Texas raised by a single mom — but she soared past her humble beginnings to become the first African-American and Native American female pilot. Known for performing daredevil flying tricks, she was dubbed “Queen Bess,” “Brave Bessie,” and “The Only Race Aviatrix in the World.” Her goal? To encourage women — especially African-American and other women of color — to reach their dreams.

Her mother was an African-American maid; her father, a Native American sharecropper. When Bessie was 9, her father moved back to Oklahoma to try and escape discrimination. Bessie’s mother did not go with him, staying in Waxahachie, Texas. Childhood was what you might imagine for poor African-American children in the racially-divided South at that time. She walked four miles to a one-room schoolhouse that lacked the basic materials that most students take for granted today, and helped her Mom pick cotton and wash laundry to help earn extra money. But despite these humble beginnings, Bessie excelled at mathematics, and she finished all eight grades.

College, Chicago, and Falling in Love with Flight

By the time she turned 18, Bessie had saved enough money to attend the Colored Agricultural and Normal University — today Langston University — in Langston, Oklahoma, but completed only one semester before running out of money, and returning to Waxahachie, Texas.

When she turned 23, Bessie decided to move to Chicago, where she moved in with one of her brothers. She went to beauty school in 1915 and became a manicurist at the White Sox Barber Shop. Chicago is where she fell in love with flying; she would listen for hours on end to pilots’ stories about their adventures during World War I.

Her two brothers served in the military during World War I and came home with tales from their time in France — where French women were allowed to learn how to fly airplanes. This fueled her dreams of becoming a pilot. Bessie applied to many flight schools across the United States but received countless rejections; no school would accept her because she was both a woman and a woman of color. Her brother teased her, saying that women in France were better than those in the United States because they were allowed to fly. Bessie — determined to fly — decided to take her dream across the pond to France, where she could become a pilot.

With support from a local banker and famed Chicago Defender newspaper publisher, Robert Abbott (one of the first self-made African American millionaires), she took a crash course in French from the Berlitz language school so that she could complete her application, which needed to be in French. At long last, she was accepted at the Caudron Brothers’ School of Aviation — founded by sibling aviation pioneers René and Gaston Caudron, in Le Crotoy, in northern France. Triumphant, she set off for Paris on November 20, 1920, aboard the ocean liner S.S. Imperator.

She began a seven-month flight course, learning to fly in a Nieuport Type 82 — a fragile, 27-foot long biplane, with a 40-foot wingspan. Not the steadiest craft, Coleman had to inspect it tip to tail before every flight. She learned aerial maneuvers like tail spins, banking, and loop-the-loops, but also witnessed an accident that killed another student. On June 15, 1921, Bessie Coleman became the first African-American and Native American woman to earn an international pilot’s license, granted by the Fédération Aéronautique Internationale, an organization that oversees aeronautic sports, that gave her the right to fly anywhere in the world. After several months of additional training with a top French pilot, Coleman was ready to return home and fulfill her dream of owning a plane and opening her own flight school stateside.

When she returned to New York City in September of 1921, The Associated Press lauded her as “a full-fledged aviatrix, said to be the first of her race.” Coleman gave speeches and showed films of her airborne exploits in theaters, schools, and churches to earn money — but refused to speak anywhere that was segregated, or that discriminated against people of color. In 1922, Coleman performed the first public flight by an African American and Native American woman. She dazzled onlookers with her daring stunts — showing off her aerial skills by doing loop-the-loops, making the figure “8” with her plane, and became famous for walking on the wings of her plane while aloft or parachuting down while a co-pilot took the controls.

Her performances riveted people in both the United States and Europe. Her aerial exploits were widely covered by the press — particularly in black newspapers — and she became a glamorous sensation. Coleman toured the United States, giving flight lessons, performing in aerial shows, and inspiring African Americans, Native Americans, and women to learn how to fly.

A Plane of Her Own

Eventually, Coleman saved up enough money to buy her own plane: a military surplus Curtiss JN-4, known colloquially as a Jenny. She went to Santa Monica, California to pick it up. While there, Coleman was to perform at an air show — but instead ended up surviving her first major plane crash. As she was taking off to fly to the Los Angeles Fairgrounds, the site of her show, her engine suddenly stopped working, and she plummeted from 300 feet up to the ground. She destroyed her plane and sustained severe injuries, including a broken leg, several cracked ribs, cuts on her face — but was able to fully heal and went back to performing daredevil aerial stunts in 1925.

It All Comes Tumbling Down

By April 1926, Coleman had saved enough money to purchase another surplus Jenny plane. She scheduled an aerial show for May 1. On April 30, Coleman and her co-pilot, William Wills, took a practice flight in the new plane. Coleman sat in the passenger seat, unharnessed so that she could peer over the side of the plane once in the sky and find a good place for her parachute landing during the show. But at 3,500 feet in the air, a loose wrench got stuck in the engine of the plane, and Wills was unable to control the steering wheel. The plane flipped over — and Coleman immediately fell from the open plane and died instantly on impact. She was 34. Wills crashed the plane just a few feet from Coleman’s body; he also died. Her death was heartbreaking. More than 10,000 people came to pay their respects, with the journalist Ida B. Wells — famed for her crusade against lynching — leading the ceremonies.

She was never able to open her flight school, but many flight clubs have since been named in her honor. In 1931, the Challenger Pilots’ Association of Chicago began a tradition of flying over Coleman’s grave every year; in 1977, African American female pilots created the Bessie Coleman Aviators Club; and in 1995, the Bessie Coleman stamp was issued to honor her accomplishments. At a time when flights are largely grounded due to COVID-19, we remember Bessie Coleman, who saw aviation as a way to empower people of color in the United States.