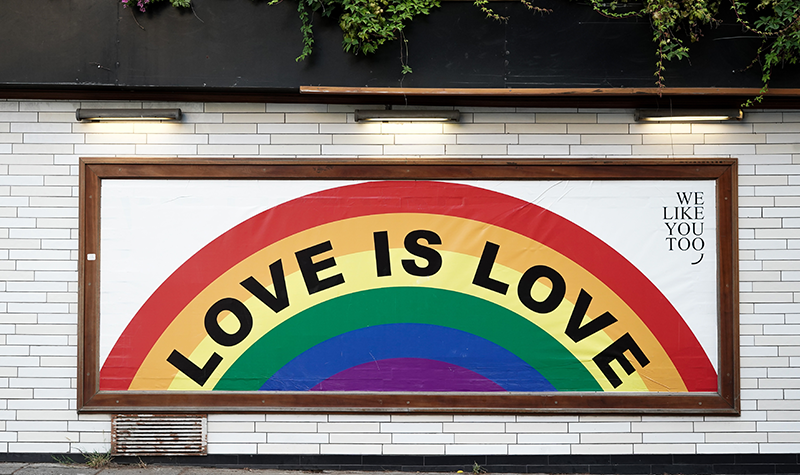 This past year, we’ve seen individuals and organizations alike using their voices to speak their values. But such moves are not without controversy. Only a few years ago, the Kellogg Foundation drew ire for funding support of BLM and an ad for Cheerios featuring a mixed-race family faced a deluge of hate comments. Advertising that depicts LGBTQ folks has also garnered criticism. This comes from both detractors and the communities represented themselves.

Advertising can play a role in advancing social justice. Through greater public representation and funding support for strategic initiatives, businesses can help.

LGBTQ purchasing power in the US hovers around $1 trillion. Globally, that number is around $3.7 trillion. Yes, the advantage of affluence in the community disproportionately benefits white cis gay men. But we are undeniably a huge market segment. Queer folks want to see messages of support and representation in advertising.

On the flip side, it was widely publicized in 2012 that Chick-fil-A Foundation donated to two anti-gay organizations. Their mostly conservative fanbase doubled down on their support. They were met with kiss-ins and ridicule. Perhaps it was their expansion into more liberal cities — rather than protests and education efforts — that led to an end of that funding support. Right wing pundits criticized the switch.

When social movements reach a tipping point of public support, advertising can make what was once radical into something mainstream and apolitical. Activists routinely criticize corporate sponsorships at pride events for creating a sanitized “corporate pride.” In the landmark book, The Revolution Will Not Be Funded, the authors caution that social movements for liberation can be co-opted by nonprofits, foundations, and corporations in support of the status quo.

The shift in public perception can lull people into complacency. Those at the margins of the LGBTQ community — people of color, trans folks, the poor — are too often left out of the conversation. While advertising featuring the gay community continues to grow, devastating policy can seem to undo the incremental changes made.

That said, representation does matter. Seeing our relationships and families represented in commercials, rainbow flags splashed in storefronts everywhere, gender fluidity in fashion ads, and countless other examples, does play a part in shifting the public narrative. And it can sometimes lead to positive political change.

Absolut, the Swedish vodka sold by Pernod Ricard, is not afraid to take risks in their advertising strategy. Absolut began promoting the brand in gay publications back in 1981! The vodka, sold at Studio 54 in the 80s, led to an encounter with Andy Warhol. That initiated their legendary print advertising collaborations with artists. Here’s a sample of 10 of those ads speaking to the LGBTQ community, created by the ad agency TBWA Worldwide.

Lesbians love to joke about our affinity for Subarus. But before the targeted ads of the 1990s, the company’s marketers identified lesbians (as well as hikers, teachers, and others) as fans of their all-wheel-drive vehicles. Those marketers took a risk at a time when other companies were pulling their ads from the Ellen sitcom (after she came out). Subaru promoted the brand to gays and lesbians in ads created by Mulryan/Nash. Sometimes the messages were “coded” to the community. That gamble paid off. The unassuming car manufacturer won lifelong dedication from the tribe.

Long before boycotts for “promoting gay lifestyles,” a former Target CEO made a sizeable donation to an anti-gay politician. But we’re a forgiving bunch. Target made strides as allies by standing up for marriage equality (see this ad featuring gay dads). They publicly came out to welcome trans employees and shoppers. These days, we love their campy aesthetic, their Pride clothing section, their inexpensive housewares, and their open support for the community.

In Our Own Words: It Gets Better Project

The LGBTQ community has long wielded the power of advertising approaches to lobby for change to policy and to shift public consciousness. The “Kissing Doesn’t Kill” campaign for ACT UP during the height of the AIDS epidemic was unprecedented. It was politically charged, clever, and wildly influential.

The “It Gets Better” Project was launched in 2010 by columnist Dan Savage and his husband Terry Miller. It features videos made in response to high rates of death by suicide of gay teens and youth perceived to be gay. It is strategic storytelling at its finest. Google Creative Lab created a spot highlighting the campaign the following year and leveraged it to show the power of the web for good.

It’s not the first ad or product geared towards the trans community. But this spot for Secret deodorant features androgynous queer model Karis Wilde. Ending with the tagline, “there’s no wrong way to be a woman,” it’s understated and sweet. Parent company Proctor and Gamble (P&G) has garnered criticism, however. The spot affirms the right to use a bathroom aligned with one’s gender identity. But the company doesn’t defend those rights for their own employees or more broadly.

The 2014 “Can’t Find the Words?” commercial from Spotify is a sweet, subtle take on that feeling of butterflies in your stomach when you’re interested in someone. This time, the characters are two Black men and we watch as those three dots indicate waiting for a response. LGBTQ people have always been well represented in the arts, so it’s only fitting that a music streaming app would take this approach.

It’s hard to deny the role that advertising can play in social change, whether it leads the way for other brands or simply follows the trend. It can show support for our communities, advance our causes, and help shift culture. Companies that take those risks show support for their own diverse workplace, earn social capital, and cultivate brand loyalty. Happy Pride!